Today, whenever you enter a convenience store or supermarket you see large coolers full of cold, refreshing beverages. But when carbonated soft drinks first hit the market, people could only buy bottles at room temperature.

That all changed in the early 1920s, when Coca-Cola and Pepsi pioneered the in-store self-service beverage cooler. For the first time, carbonated beverages were widely available as they were meant to be consumed - ice cold. The coolers became ubiquitous in grocery stores and filling stations. 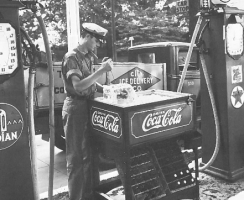 Jumping on the industry's cooler innovation, the American Bottlers of Carbonated Beverages (ABCB - now ABA) launched a nationwide campaign highlighting the refreshing qualities of carbonated beverages. In 1924, ABCB members distributed more than one million pamphlets encouraging their customers to find that "Sultry Summer Has Its Solace" through carbonated beverages. 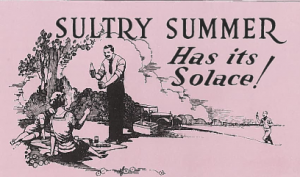 The self-service cooler was a momentous innovation that has impacted the entire food and beverage industry, and we can thank beverage companies for making our trips to the store more convenient and more refreshing.