Helping Hospital Workers, One Breakroom at a Time

Every day and night, ordinary Americans have been making extraordinary efforts to comfort and heal the sick. Hospital staffers, doctors and nurses, emergency personnel and many others spend long shifts under trying circumstances. When home, they are our neighbors and friends; on the job they are our heroes.

Keurig Dr Pepper was looking at ways to express its gratitude for the courage and sacrifice taking place in hospitals, clinics and emergency rooms across the country, said Robert Gamgort, chairman and CEO of the company. One idea that came to mind seemed obvious: help these medical folks who are working so tirelessly to take a moment to relax and recharge.

"We don't make masks or medical equipment at our company, but we do make beverages," Gamgort said.

So the company decided to reach out to hospitals and see if they could equip their break rooms with Keurig brewers, coffee and other beverages for the staffs. They started out locally near their co-headquarters in Burlington, Mass., and Plano, Texas. Hospital after hospital said they would be more than happy for the help. 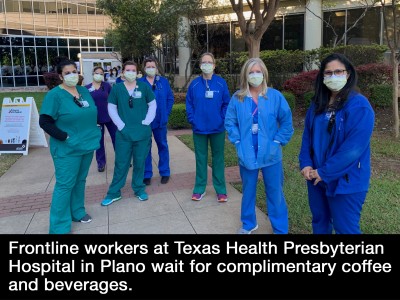 The effort was named Fueling The Frontline, and workers at Keurig Dr Pepper just kept it going.

They stocked breakrooms in 21 hospitals in and around Boston that were working overtime to care for COVID-19 patients, including Massachusetts General Hospital, Boston Medical Center, Boston Children's Hospital and hospitals in the Beth Israel Lahey system.

In the Dallas area, they boosted breakrooms at several hospitals, including Parkland and UT Southwestern. A mobile coffee truck delivered free hot and cold beverages to several more regional hospitals in Texas.

"Our staff were very touched by the generosity of those who contacted us wanting to do something for our staff," said Mary Jo Dean, director of community relations at Texas Health Presbyterian Hospital in Plano. "The show of support that we've received was a huge statement to our staff, no matter where they worked in the hospital, of how valued they are by the community." 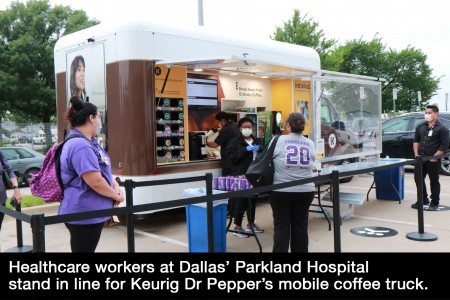 The company turned its attention to medical workers grappling with the most severe outbreaks of the virus in New York and New Jersey, and the cities of Detroit, Seattle, New Orleans, Chicago and Los Angeles.

"Words can't describe how thankful we are to Keurig Dr Pepper for their incredible contribution to supporting our internal medicine residents," said Dr. Chanel Judith of Buffalo General Hospital. "We are beyond overjoyed by the support and dedication." 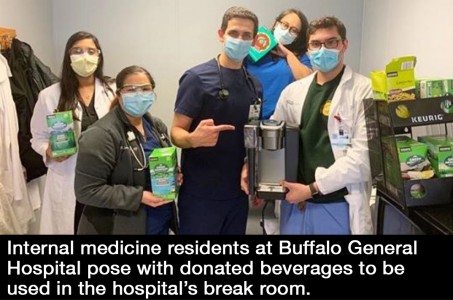 Frontline workers from Parkland Hospital in Dallas, Texas, were enthusiastic, saying the coffee and beverages gave them a much-needed lift. "It was just the boost we needed," they posted online.

Since the start of the endeavor, the company has served more than 3 million cups of coffee to more than 400 hospitals and outfitted thousands of breakrooms nationwide.

Gamgort said it was their way to say thank you for the unwavering commitment and courage of the entire medical community.

"It is during times of uncertainty that I am reminded of the tremendous resiliency and generosity of the human spirit," he said.