Slowing the spread of COVID-19 has involved the efforts of many parts of our community. Medical professionals, essential workers, first responders, government agencies, caregivers, charitable groups and regular citizens all have been joining in. Businesses and employees have been taking part too, and sometimes it’s their knack for figuring things out and getting them done that is just what’s needed to solve a problem.

In Tulsa, Okla., beverage bottler Refresco was asked if it could find a way to help its city’s first responders overcome a shortage of hand sanitizer. An Oklahoma legislator had reached out to Red Fork Distillery in Tulsa to see if the craft whiskey maker could turn over some of its operation to the production of alcoholic hand sanitizer. Red Fork was eager to help, but it didn’t have the kinds of bottles needed to package sanitizer. That’s when State Rep. Chris Sneed gave Refresco a call.

Refresco is the largest independent bottler of soda and juices in the world and so has access to a variety of packaging types, including versatile and hygienic PET plastic. Within days, Refresco’s employees were able to marshal almost 90,000 suitable plastic bottles at its Joplin, Mo., facility to be donated to the cause. The bottler brought in caps from its plant in Greer, S.C. The bottles and caps still needed to get to Tulsa, so Refresco Plant Manager Todd Burgess called on a transportation company it works with, which agreed to ship the load to the distillery. Not done, Burgess called an old friend at a local box maker company to provide cardboard boxes to Red Fork so the distillery could package up the hand sanitizer and ship it efficiently.

In the end, Refresco had mobilized people at four of its plants and roped in the help of three local businesses to get the city the supplies it needed. Red Fork, named for the first legal distillery to open in Oklahoma after the end of Prohibition, was able to donate the hand sanitizer to the Tulsa Police Department and other Tulsa area first responders and healthcare providers in a short amount of time. 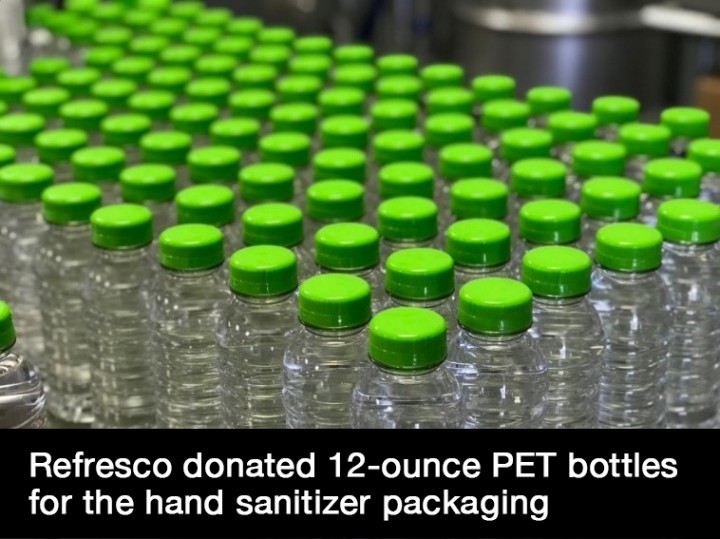 Rep. Sneed praised the community spirit of Tulsa’s businesspeople and their employees in a crisis.

“It was an honor to connect both Refresco and Red Fork Distillery to help out our front lines and first responders during this time of need,” he said.

Helping out with sanitizer bottles got Refresco thinking about other ways they could protect folks responding to the virus. The beverage maker didn’t have a still, but it had other equipment that could be adapted to make hand sanitizer. So the company devoted some operations at its concentrate manufacturing plant in Columbus, Ga., to the production of its own batch of hand sanitizer.

The workers in Georgia made a first batch of 2,000 gallons of hand sanitizer solution and they plan to keep up production well into the future, as long as a shortage remains, they said. More than 10,000 gallons of hand sanitizer are slated to be distributed to Refresco’s 63 sites across Europe and North America and donated to healthcare facilities, shelters, law enforcement offices and nursing homes. 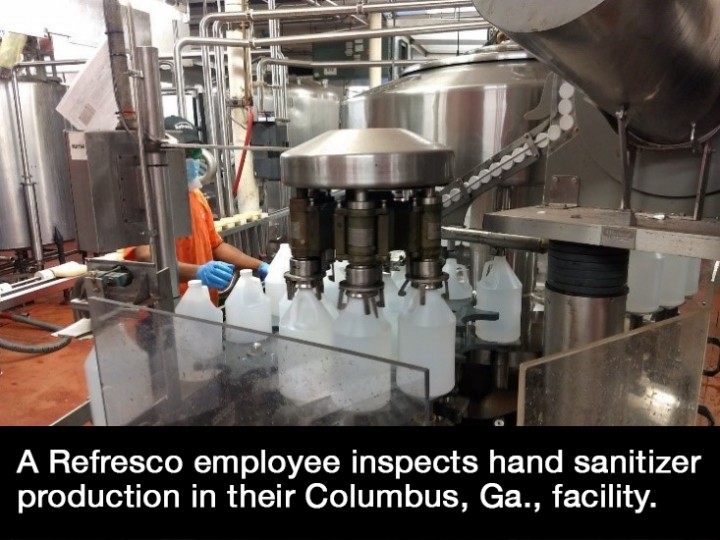 Sam Khoury, vice president of Regulatory QA and Tech, tipped his cap to the Refresco employees who worked to make it all happen.

“We all feel passionate about the ultimate goal of doing the right thing: supporting our communities and keeping our colleagues safe and reducing their risk of contracting the virus,” he said.

That passion extended to a charitable group in Canada that was dealing with a shortage of protective face shields. Lespacemaker, a nonprofit workshop that teaches trade skills, wanted to make face shields to donate to frontline workers in Montreal. But the group needed donated materials to get the job done. Lespacemaker contacted Refresco, which connected the workshop to its plant in Pointe-Claire, Quebec. That facility donated hundreds of 2-liter bottles that Lespacemaker used to make nearly 1,000 face shields for local organizations, health workers and social workers. 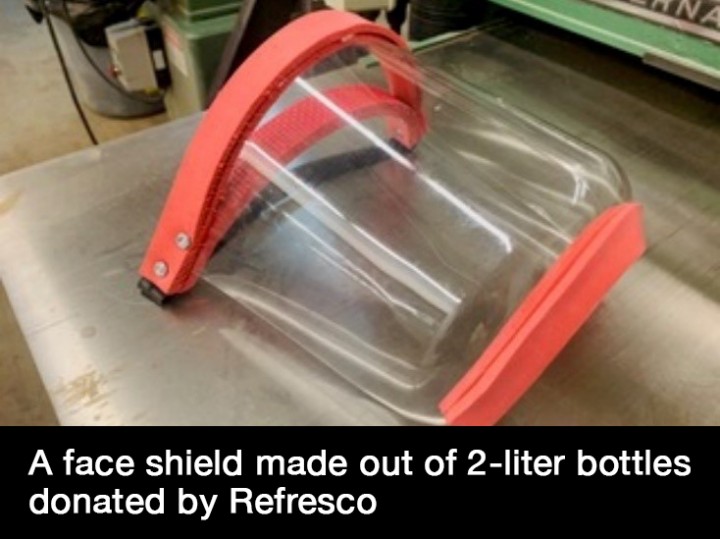 “It was a good feeling knowing the company supported our actions to help others,” he said.